Who could imagine a trip to Bavaria without the visit of Neuschwanstein Castle? The bucket list destination is a magnet for anyone who saw its pictures. But how many know that there is another castle, Schloss Hohenschwangau, right near Neuschwanstein? And also a stunning lake?
I flew to Munich on Saturday, picked up my friend and we drove all the way to Fussen (another charming town with monastery and castle). The town is very close to the castle. The plan was to beat the crowd and meet sunrise near Neuschwanstein castle.
When I planned the trip, I read that famous Marienbrücke should be closed for renovation on the exact date we planned to visit the region. So to be safe, I googled a place where you could hike to get another beautiful view of the castle. Few bloggers mentioned a path (and of course not official) that required to climb the fence and do some scrambling to the top of the hill near Marienbrücke. So I decided to try.
When we arrived at Hohenschwangau, the small town near both Neuschwanstein and Schloss Hohenschwangau, the valley was covered with f  g. It felt like a good October morning. We parked a car at the empty parking lot and started our way up to Neuschwanstein Castle. The road and trail were empty. I wanted to check the secret path, but we weren’t able to find the place where it starts. And the way to Marienbrücke looked like opened. So we tried it… And it was our luck. I guess, the workers supposed to start closing it with the beginning of working hours but we were before the sun even rose!
And what a view it was! Remember, I wrote earlier about the fog in the valley? From the bridge, it looked like a white sea of clouds. The pink-ish skies and the woods started to turn yellow added the magic to the scenery. Now sitting and writing about it, I still feel like it was all a dream, it was so unbelievable, a fairytale castle that rose from the fog to meet us.
In the middle age, the place had three (!!!) castles. The ruins of the first one, Schwanstein, was bought by King Maximilian II of Bavaria. Later he rebuilt then in neo-Gothic style. The new castle is known as Schloss Hohenschwangau (and we will talk more about it later). Two other castles, Vorderhohenschwangau, and Hinterhohenschwangau that sat on the mountain overlooking Schloss Hohenschwangau were in complete ruins through the remains of the Hinterhohenschwangau was used as a lookout.
When the son of Maximilian II, Ludwig, became the king, he started construction on the site of two ruins. The castle that he planned to build was named New Hohenschwangau.
Ludwig died before the final of the construction. Though the king never planned to allow public access to the castle, after his death his regent ordered to open it for the paid admission. Money was used to complete the construction, and then to pay off Ludwig II debt.
Another change happened after the king’s death; the castle was renamed to Neuschwanstein.

It’s hard to believe that this fairy tale structure was completed at the very end of the 19th century and not stayed here from the Medieval times. The palace is open for visitors on 35-minutes tours where you cannot take any photograph through the exterior of the castle is free for visitors with no fee.
I never planned to take the tour of Neuschwanstein. King lived in it only for 11 nights, and most of the buildings were far from completed during his life. Though the interior as seen on their site are stunning, I decided that if the visit with the tour then something that was used by royalty.

And so we returned to the village to pick up the tickets to Hohenschwangau Castle tour. The palace was the summer residence for an extended period, and I wanted to see what is inside of it with my own eyes.
There is a site where you could request tickets for both castles and the nearby museum of kings. The earlier that it allowed me to book the tour was 11.20 AM. However, when we picked the tickets, they allowed me to switch time to 10.15. Though we still had free time before the tour start.
There is a beautiful lake right under the Hohenschwangau, Alpsee, with a walking path along the shore.
We walked 5 minutes away from the village, when the fog that we saw from Neuschwanstein covered the lake. It was mystical and magical.

We returned to the castle 15 minutes before the tour. The line started to form, but there was one more group before us. So we walked the grounds of the castle that is open for everyone even without tour tickets.
Castle garden has few places with a overlook over Neuschwanstein and Alpsee, several fountains, everything that is needed for a relaxed morning walk.
You cannot take photos inside of the castles though sometimes guides allow photographing views of countryside from the windows. All tour took us about 30 minutes and was very informative.
When we walked out the fog almost burned out, so we took another stroll near the lake to enjoy the bright foliage of the woods before the long drive east. 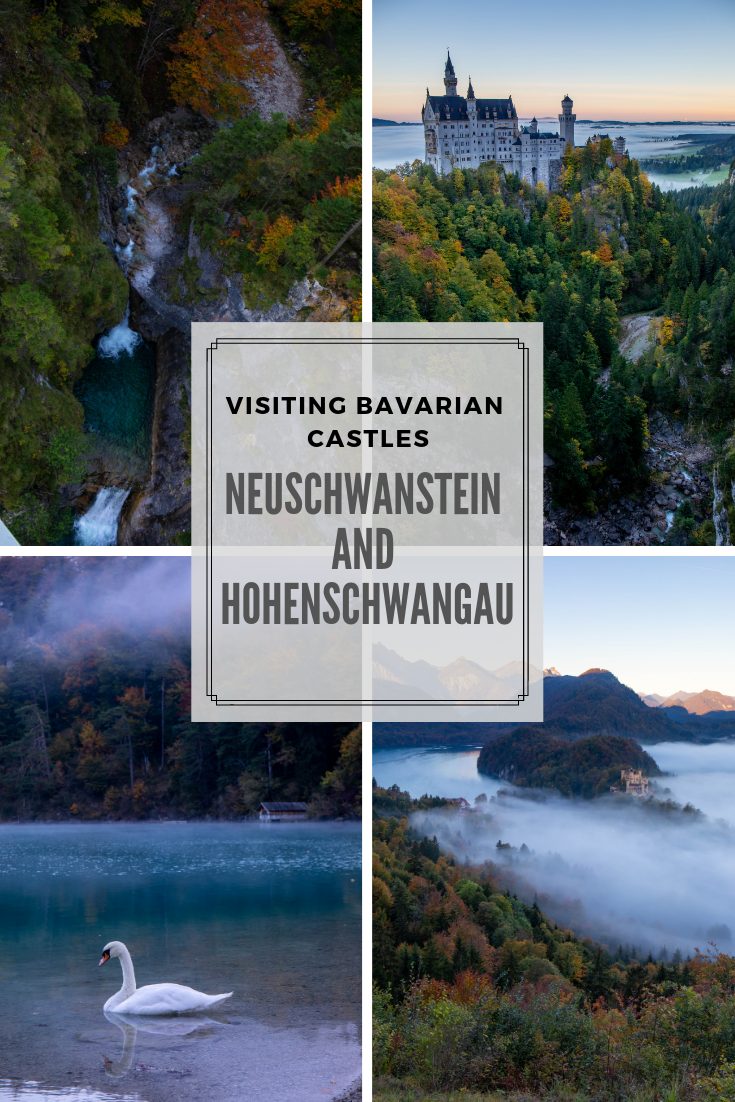 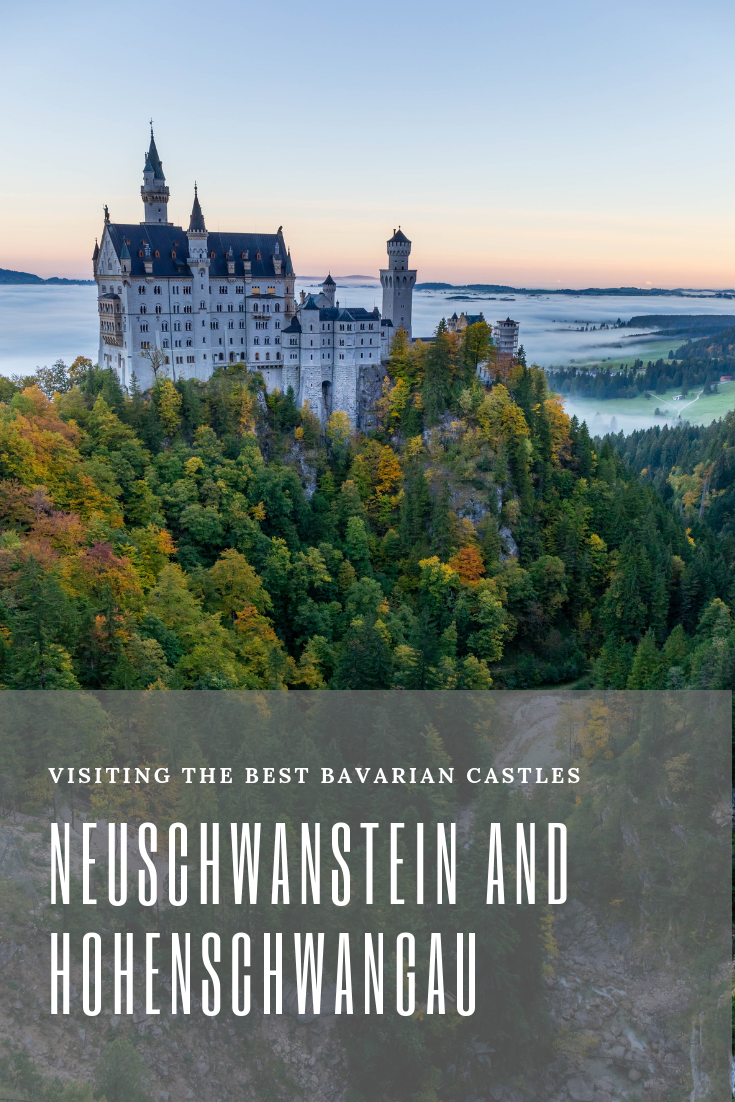