Yellowstone National Park is an ultimate item in the most people lifetime bucket lists. And the idea of spending just a day in it could sound like a joke.
Though I’m not joking. Once we started to plan the vacation week in Colorado and Wyoming, it was evident that we will miss a few of the places that good to be visited. And the most fascinating place for both of us in that moment of life was Grand Teton National Park. So I took a big breath and reserved just a day for Yellowstone.
The planning for that day was more a “let’s try” than a definite to-do. I’ve booked a cabin at Headwaters Lodge & Cabins at Flagg Ranch. It was the best place we could imagine: right in between two national parks, in the woods, near the river right near a convenience store and restaurant but so quiet and peaceful we didn’t want to leave.
In the result, we spent one adventurous day in Yellowstone. We visited most of the place we wanted minus only Old Faithful. We didn’t see extreme crowds that day though spent about an hour in the traffic. A half an hour waiting of the green line on US 89 before the Mammoth Terraces, and another half hour in unexpected delay because someone noticed an animal (was it a bear?, or did it even existed?) on a windy part of the Grand Loop Road to Tower. Crazy humans stopped on a narrow two-lane road with limited visibility in both way and tried to get a glimpse of this animal. I hope at least someone saw it. But please don’t be such a person. Think about others and your own safety.

We started the day early to beat the crowds. The closest entrance for us was South West. It was in a few miles from the Flagg Ranch. It was around 8 am when we stopped at the park entrance, and it took us less than 10 minutes to pass.
The goal of an early start was to be near the Middle Geyser basin before the tourist buses arrive and parking lots become full.

It would be obvious if I say that Grand Prismatic Springs is the biggest highlight of Yellowstone. 370 feet across and 120 feet deep pool surrounded with unbelievable colorful bands of algae. The steam from the pool creates a mist over the surface that reflects the colors to become colorful. There is a wooden boardwalk trail which is extremely popular.
Another way to check the springs is to take Fairy Falls Trail. The trail, of course, is also quite popular but the length of it and the width allowed to take a look on the pool from the higher ground.
The trail leads to the Fairy Falls but creates a loop that leads to the top of a nearby hill. Most of the visitors just go immediately to the observation deck, and then immediately back.
We found that if you make a loop, you will get a closer look at the edge of the pool.

The trail follows Firehole River and passes few smaller pools, the colors of them not so deep.
If you followed trail further, it would pass Fairy Falls and eventually pass Imperial and Spray Geysers. Total trip would be 3 miles.

From Grand Prismatic road passes Lower Geyser Basin and follows Firehole River. At Madison road splits. Road 191 turns left to Yellowstone West entrance, which also considered as the busiest one. Route 89 takes a left and enters Norris Geyser Basin. Here Gibbon River becomes the main artery.
After a few miles from the Madison, the road passes 84 foot Gibbon Falls. Though the parking lot is busy after a few minutes of wait, we were able to find a spot.
The short trail leads to a few overlooks. The distant one has the best view.

Few miles south of Norris Geyser Basin, there is a group of several collections of thermal features. Artist Paint Pots is a group of over 50 springs, geysers, vents and mud pots.
The trail starts from the parking lot and goes through the forest. When reaches the active area it becomes a boardwalk. The boardwalk loops around hot pools and covers Paintpot Hill features.
A short walk will show all possible colors and forms of geothermal features. Nothing grand though but a nice stop.

From Norris Basin, US 89 goes towards the Mammoth and Northern entrance. Mammoth Terraces are probably the most prominent feature of this region.
You could see them from the road, but still, the best way to explore is to try to find a parking spot on the Upper Terrace and explore from there.
The wooden boardwalk allows to check major prominent springs and terraces though stays mostly around Main Terrace. I think that the most beautiful are Mound and Minerva, Cleopatra and Main terraces, and of course Palette Springs.
The upper terraces are smaller and less colorful but less popular. At one point, we were the only visitors checking White Elephant Back Terrace.

Soon after Mammoth Hot Springs, we turned to Grand Loop Road that leads further East towards Tower District.
The scenery here changes, the road passes through the treeless plateau before the Tower Junction. The main attraction here is Tower Falls. Falls are created by Tower Creek that flows through the sharp unusual volcanic spires. A short trail leads to the overlook. There was a trail to the base of the falls that currently closed due to the landslide happened a few years ago.
Near the parking, there is a general store where you could buy lunch, souvenirs or ice cream.

From Tower, we drove to the Canyon Village. The original plan was to find parking on North Rim Drive and check out a few overlooks. The problem was that the turn to North Drive was shot because parkings were full. We parked in a small pullout near the turn to North Rim, from there we took a trail. The whole distance we hiked increased approximately 0.5 miles. But I should tell, as soon as we reached the first overlook, the entrance to the drive was open again.
We checked a few vistas along the North Rim. From Grandview, we also took a trail down to the lower overlook.
We weren’t fortunate. One of the most famous overlooks, Artist Point, was closed for renovation. However, I still happy with all the stops we were able to make.

After the hiking along Yellowstone River, we stopped at the visitor center for stamps and magnets. It was almost a closure time. So we headed back south passing the Yellowstone Lake.
The last stop we did was near Lewis Falls. When we drove there in the morning, the place looks fabulous.
The trail is short and easy and leads to a side viewpoint. Though you can scramble from it to the river closer to the base of the falls. After exploring a different side of the falls and river, we returned back to the parking lot, walked back the bridge to another side of the river. Here there are few small trails to another excellent angle of the stream and waterfall.
The only minus of the place were mosquitos. It was almost impossible to stay still. The remedy we had almost didn’t help. And the next day my legs were covered with red spots from the bites.

Map with all our stops 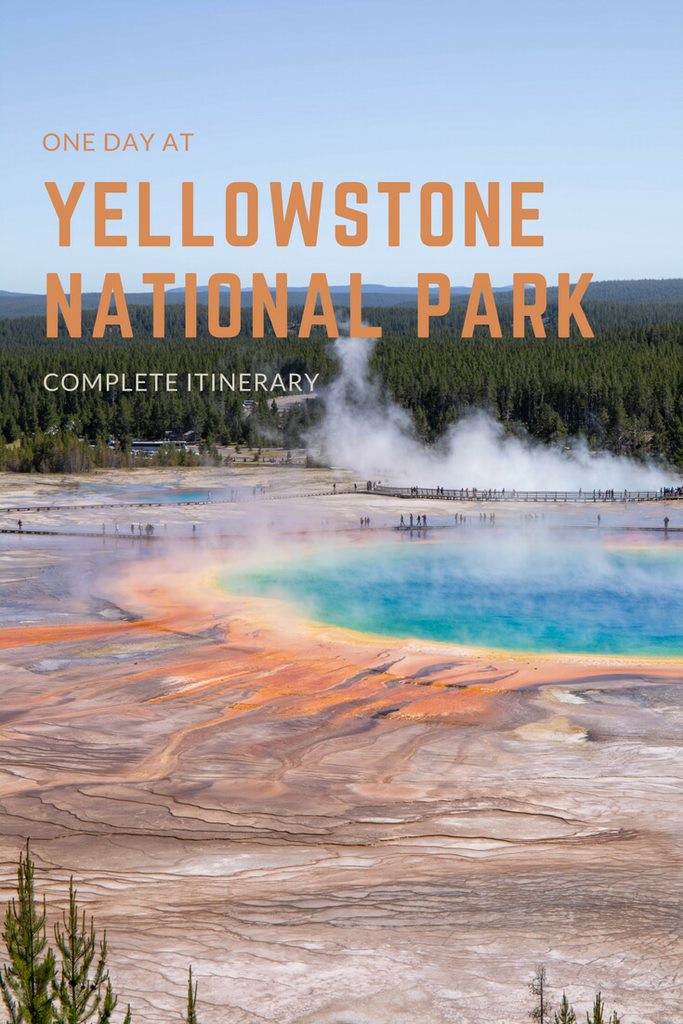 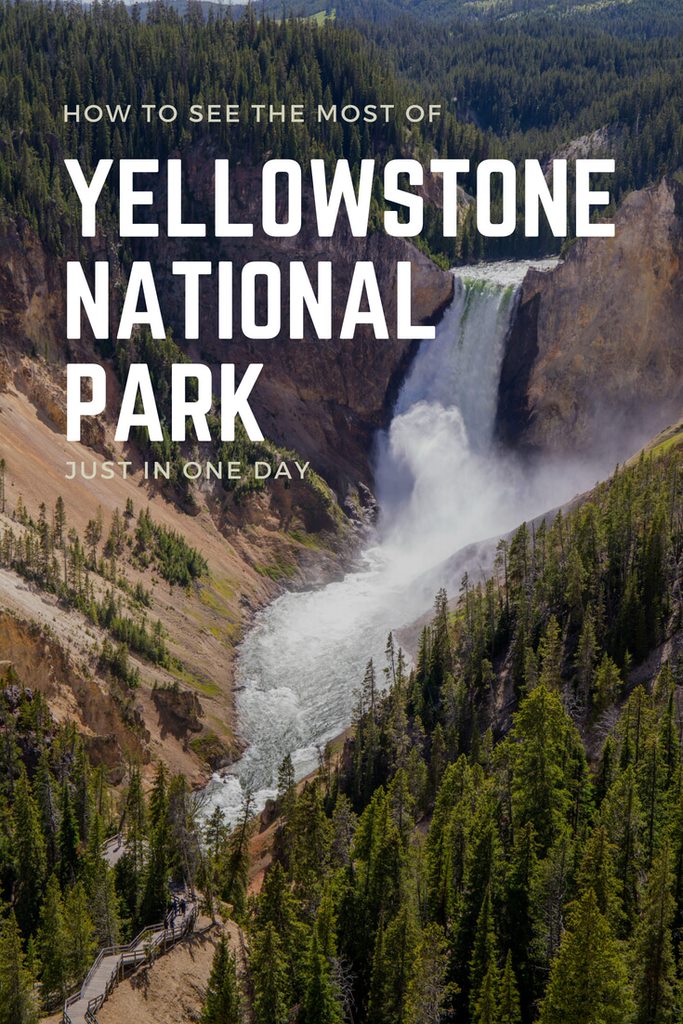