Some of the sites in the list are closed due to CZU Lightning Fire Complex and SCU Fire Complex. Please check web sites on the latest info.
If I ask you, what place would you think when I ask you where to find wildflowers in California, I doubt, I will hear “Bay Area.” But indeed it is.
The valley is surrounded by hills that most time of the year golden brown. But when winter storms come and bring the rain, the green of the grass returns for a short season. And when the clouds give way to the sun, wildflowers pop up.
Wildflower season is even shorter than the green hills season but brings all the variety of flowers you can only imagine.
You could expect first sighting closer to towns on lower elevations, and by the middle may reaching tops of the higher mountains and hills right before letting all the yellow color its way.
Disclaimer: most of the parks in the post below are in South Bay or Peninsula. We’re located in that region, and I explored it the best.

There are several parks that feature mostly grassy hills. These parts of Santa Cruz mountains have patches of wildflowers usually April to mid-May.

If you ever read any book on hiking in the Bay Area, you probably remember that this region is famous for its wildflowers. We never had a chance to visit when flowers are in bloom. We are either very early in the season, or too late (see below). However, even when you visit late you still able to get at least some idea of what park could look on full bloom.

This park is our all-time favorite. We’re visiting it several times per season and never had a dull moment.

It’s the only park on the east side Skyline Blvd (overlooking Bay Area) that I love with all my heart. It looks similar to Russian or Long Ridge Open Spaces, the same rolling hills and redwoods covered canyons, so expect mostly the same flowers.

The southern part of Santa Cruz mountains has a range of trails that blooms with all possible flowers starting from Mid March to the beginning of May. The hills there have lower elevation so expect flowers to pop earlier, and grass to turn yellow in May.
The trails are on the longer side but on warm Spring day, the air and views will make an enjoyable outing.

The county park is centered around the old farm and reservoir. However, it also has a wide network of trails, from those that are easy and follows creeks along with the working farms to the trails that will lead you up to the top of high hills with views up to Monterey Bay.

Santa Clara Open Space Authority manages 12 miles of trails south of Calero Reservoir. The park connects with Calero County Park. You can combine several trails to make it a day outing or follow the Longwall Canyon trail to make it an easy evening stroll. The place has an abundance of wildflowers, lower elevation trails start to bloom in March. And you can still expect to see some flowers along Bald Peaks Trail up till mid-May.

Rancho San Vicente is the latest addition to Calero County Park. Peninsula Open Space Trust manages it but you can find the trails on county park maps.
Several miles of trails could be combined into the half-day loop. Expect the grassy hills with oaks, shadowy canyons with streams in early spring, and a lot of wildflowers from late March to April.

Diablo Range hugs East and South Bay communities with his high peaks and green hills. Most hikes are very well known, and very popular especially during the “green” wet season. But there are more to the parks in those parts. The hills start to bloom in April, higher elevation ranges pop in late April mid-May. However, the flower season here is shorter than in the Santa Cruz Mountains. As soon as temperatures rise, the grass quickly turns yellow.

Another popular Santa Clara county park with a very wide range of trails. Most of them have no shade and could be extremely hot. The park is great for a day excursions. Expect old farm sheds, old oaks, views of the bay, bull and cows, mountain bikers, and Lick Observatory as a beacon looming over you.

If you ever drove through Pacheco Pass to I-5, you saw the hills above the San Luis Reservoir. Those hills are part of Pacheco Pass State Park. The southern portion of Diablo Range is only partially in Santa Clara County but it still a close distance drive if you want to see the bloom that could challenge Southern California.
During April the hills are covered with California Poppies and looks amazing. There is almost no shade. Expect trails with stunning views of the ranges and reservoir, centuries-old oaks, and of course wildflowers.

If you never hiked Sunol, you missed a lot. The quintessential preserve of East Bay has many miles of trails with one of the best views in the Bay Area. You can do a day hike, or backpack (see park page for information on closures). Expect to find wildflowers in April.

It’s really hard to predict the bloom in the mountains. Dry winter could almost reduce wildflowers to zero. Hot Spring can drastically shorten the season. Or you could miss it altogether if Spring will be early.
However, the coast will always have something to show. From early Spring up to June, expect to find something. 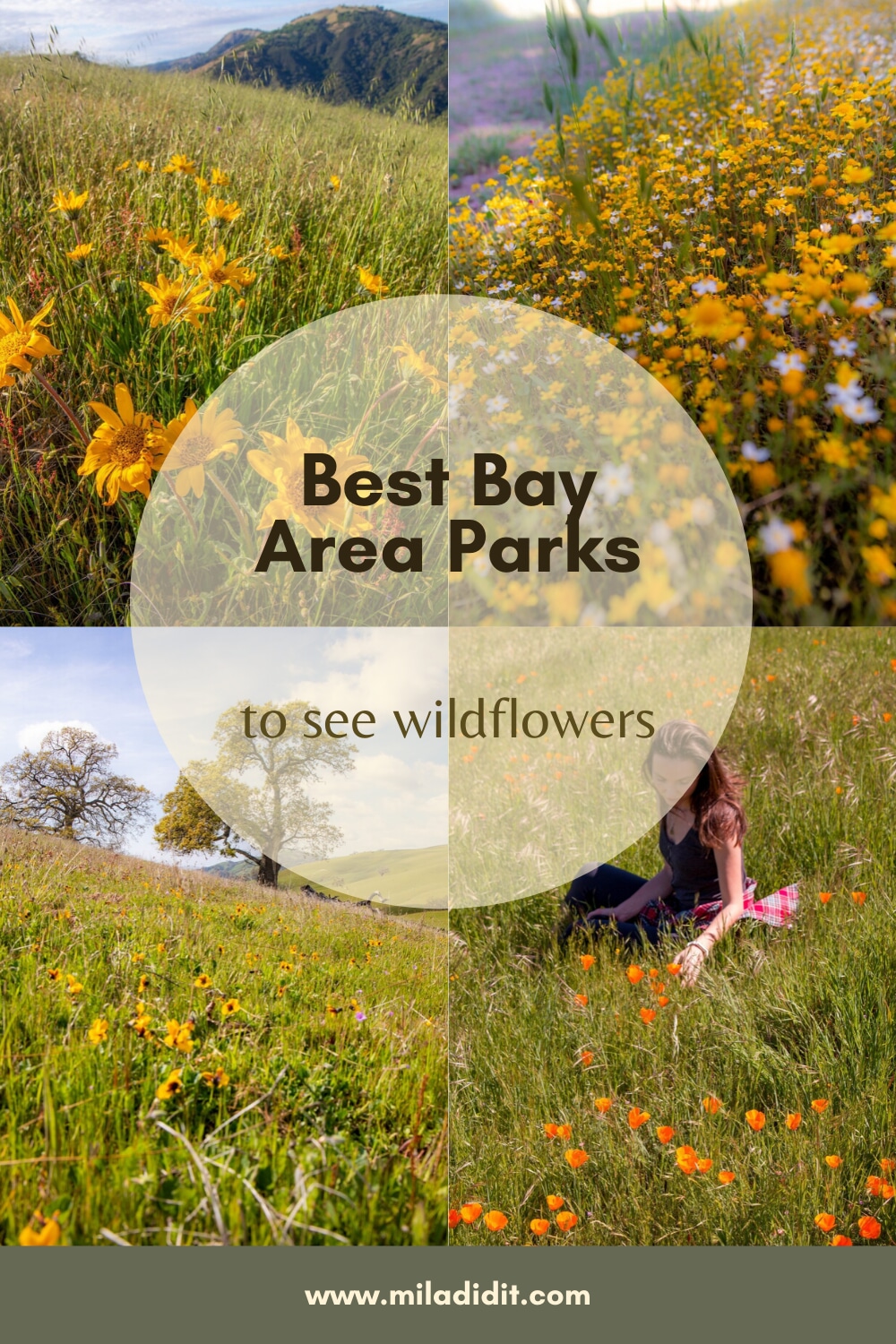 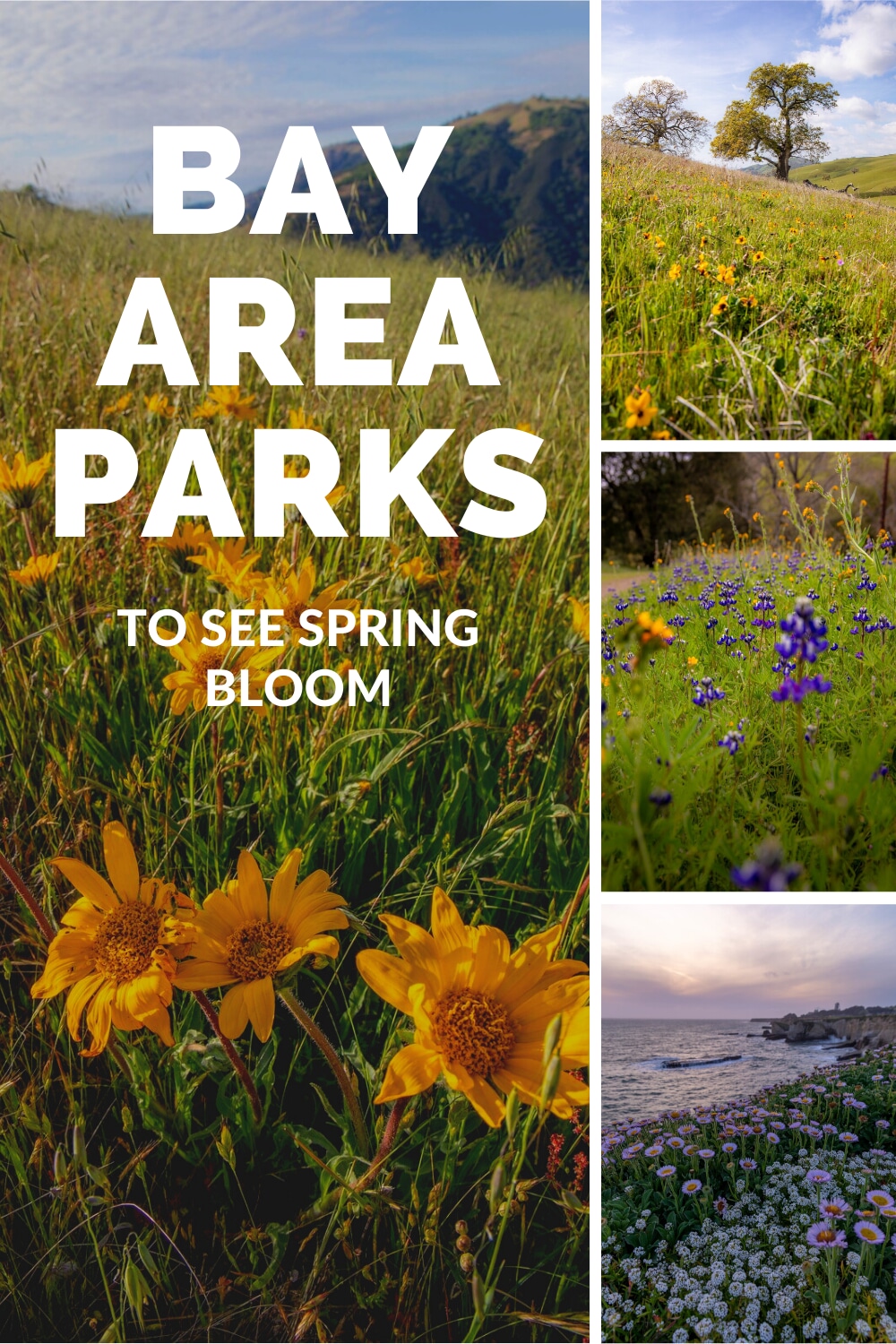