In October 2018 we spent several days in Bavaria. And one of the day we explored Munich. We spent the whole day on our legs but saw and learned so many that I would remember this trip for a long time.
The following guide will describe our itinerary with all our steps and rest stops, and show the photos I took while there. It’s not an ideal guide, mostly my impressions.
We started from the Karlstor, the historical Munich wall and the western end of Neuhauser Straße. The street has a concentration of historical buildings and monuments, shops and restaurants. Our first stop was St. Michael’s Church, the largest Renaissance church north of the Alps.

Photos 1-2: St. Michael’s Church exterior; 3-4: the interior of the church
From there turn towards Frauenkirche with its twin towers. During our visit, it was surrounded with the renovation, so we just walk around and continue our exploration towards another church – Asamkirche. And it impressed us dramatically! The small church looks like the jewelry box: full of gold and marble of all imaginable shapes and forms.

Photos 1-2: Frauenkirche as seen from intersection of Neuhauser Str, Augustinerstraße and Färbergraben. Photo #3: exterior of Asamkirche. Photo 4: the impressive Asamkirche from the inside.
From there we walk towards the Sendlinger Tor, then turned on smaller streets and wondered there until reached Munich Stadtmuseum.
If you have some free time, visit it. Or as we did – we check it around. There was an exposition outside of old columns and other construction decorative elements.

Photo 1: Sendlinger Tor. Photo #2: square outside Munich Stadtmuseum.
At this moment you should be a bit hungry (especially if you had light breakfast). So it’s a good time to stop at Viktualienmarkt, local market, where you can find meat, cheeses, local bread and pastries, wines and beer, and coffee.

Photos 1-3: local goods at Viktualienmarkt; photo #4: take a break with cheese pretzel and coffee; photo #5: the view from Viktualienmarkt towards St. Peter’s Church and Spielzeugmuseum.
Now, when you had a snack, it’s time to have a bit of cardio. The next stop is St. Peter’s Church, or Kirche St. Peter, the oldest parish in the city, is also the home of the best observation deck in Munich. To see all the old town, you need to climb 299 steps.
Tip: St.Peter’s Church has an excellent view of Neue Rathaus’s Glockenspiel. If you can plan the observation deck at 11 am, or 12 pm, or 5 pm in summer, then you also will have the first round seats to the Glockenspiel performance.

Photo #1: St. Peter’s Church from Peterspl; photo #2 – the inside of the St. Peter’s kirche; photos ##3-6: the view from observation deck in St. Peter’s Church tower; photos ##7-9: the view on Glockenspiel play and the crowd on the Marienplatz (11 am time).
Now you saw Marienplatz from the top, and it’s good to explore it from below. The square was named after the Mariensäule, Mary’s Column, centered in it. Also, it’s home for Old and New town halls. Neues Rathaus, New Townhall, is this gothic-looking building with Glockenspiel. Old Townhall, or Altes Rathaus, is a white building with the tower that is dated to 14th century.
Tip: if you visited St.Peter’s Kirche at 11 am, now you have a chance to hear Glockenspiel from the Neues Rathaus tower itself at 12 pm!

Photo #1: Neues Rathaus as seen from Marienplatz; photo #2: Neues Rathaus from the inner yard; photos ##3-7: the view from the Neues Rathaus’ tower.
After you returned down to the square, it’s time to visit another church, Heiliggeistkirche, and you probably noticed it already when you walked to or out of St. Peter’s Church. It’s this green church dome, you saw from Kirche St. Peter and Neue Rathaus.
And when you finished wandering over the murals and interior of Heiliggeistkirche, walk towards the Old Townhall.

Photos ##1-2: interiors of Heiliggeistkirche; photos ##3-4: Altes Rathaus
After leaving Marienplatz, the route leads between several places where you probably would have a dinner or at least a bear. And also the whole mood of the busy old town streets fills you with the non-stop Octoberfest atmosphere.

Photo #1: Orange building of Augustiner am Platzl; photos #2, 5: streets of Munich; ##3-4: famous Hofbräuhaus München
Either your legs or tourists walking alongside you will lead you towards Alter Hof, Old Court, first permanent imperial residence in the Holy Roman Empire. Take a look at Der Affenturm. If you’re so lucky to be there when some guide stops with his tourists, then listen carefully about the story why this window got the name of Monkey Tower. Actually, the story that I heard is not the same as those that I read later.

Alter Hof and Der Affenturm
From there, your route will lead you towards Maximilianstraße where several museums and churches stand. If you feel like you have enough time, spend a few hours at Munich Residenz, the former royal palace of the Wittelsbach monarchs of Bavaria and impressive museum.
Near it is Theatine Church, impressive yellow cathedral. During the Second World War, the church was bombed and almost destroyed.

Photo #1: Max-Joseph-Platz and König Maximilian I Joseph von Bayern Denkmal statue; photos ##2-3: exteriors of Residenz; photo #4: exterior and ##5-6 interior of Theatine Church.
Right beyond Residenz is Hofgarten, the Renaissance style garden with Dianatempel gazebo where you could sit and rest for a while before the final destination of the day.

Photo 1: Hofgarten and Dianatempel; photo #2: Bayerische Staatskanzlei as seen from Hofgarten.
And now up to explore the latest stop of the day, Englischer Garten, that you can actually explore for several days 🙂 However, with the limited time, you can at least try to have a glimpse of one of the world’s largest urban public parks.
From the short researching, I found out the following route is optimal and could be fit in an hour or two.

Photo #1: Dianatempel seen from Englischer Garten; photo #2: red maple near Japanese Teahouse; photo #3: the view from Bridge across Schwabinger Bach; photo #4: quite Englischer Garten path; photos #5-6: the view inside of Monopteros and from it; photo #6: Chinesischer Turm
Now you’ve done with your explorations and deserve a good pint of Munich beer and at least a frankfurter.
We had two dinners at Munich:

Map with the route and stops 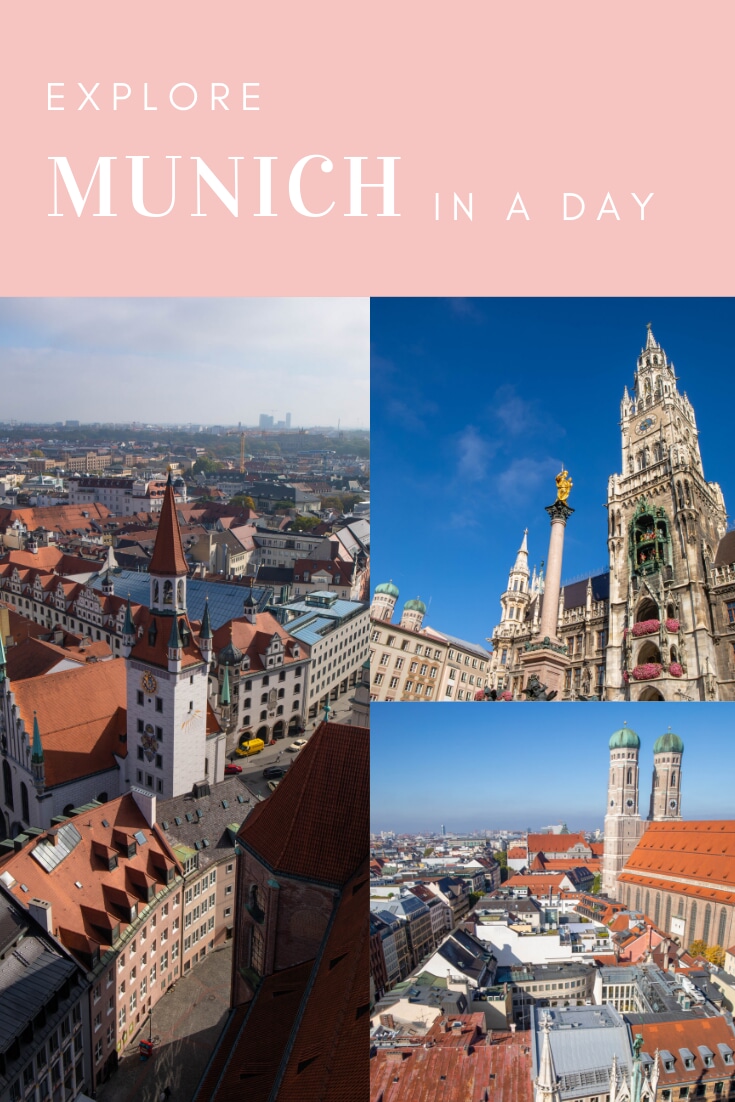 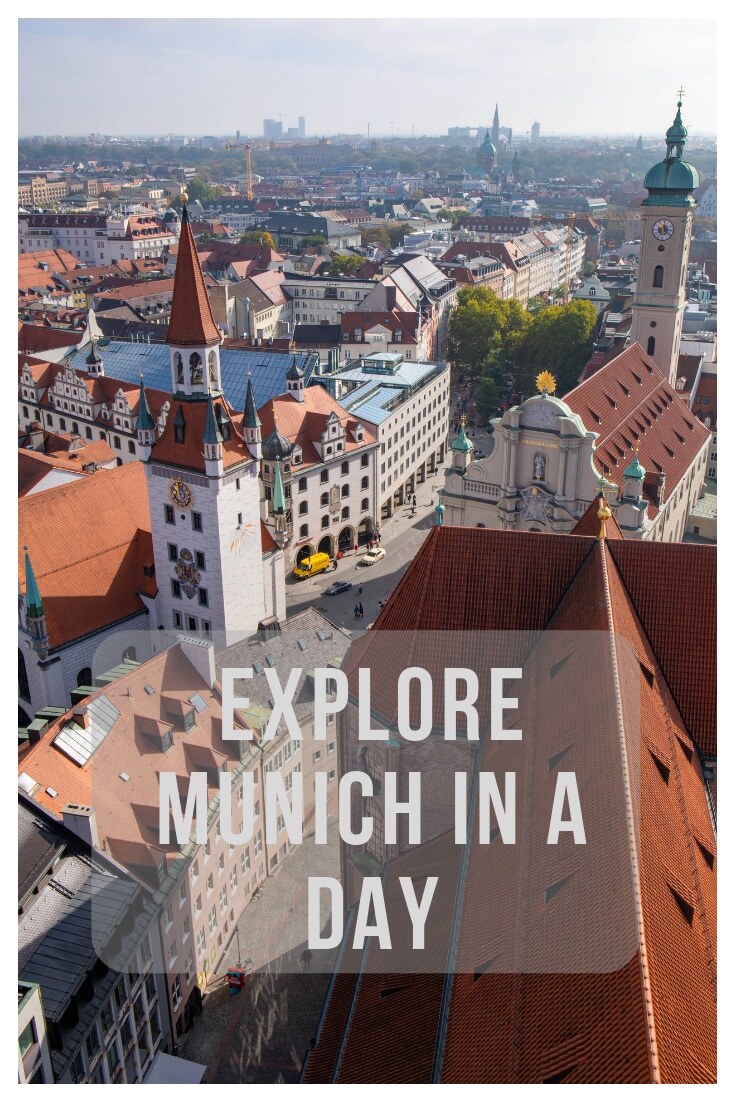