There are few things that everyone who lives in California should see with his own eyes, like Firefall, or sun tunnel at Big Sur, or fields of lupine at Tahoe, or crazy bloom somewhere in South California.
Carrizo Plain wildflowers bloom became my wish list three years ago – in 2017 when state felt abnormal wet winter after a long drought. I didn’t want to be the part of the state euphoria (and disorder) that year. So I planned to see hills of flowers in 2018 which had dry and hot winter with almost zero rain. This year I repeated the same actions as last year. I booked exactly the same hotels for precisely the same dates as in 2018.
Then I realized it rains for too long, and it’s colder than usual. And I rebooked for the first week of April. Then it was weeks of a constant googling of the sate of the bloom and the weather in the central part of the state.
On Saturday morning of April 6th, we booked 4WD and set our course south of 101. Oh, I was nervous: I was afraid we missed the blooming peak, or that we will stack with the crowds and see almost nothing, or that I will not see the bloom I always imagined.
The first try out of my feelings came around 15 miles southeast of Paso Robles when we approached some spot along route 58. At first, we saw too many cars for such a small place, then I realized that everything was yellow form the flowers.
I took a dozen photos, and we drove further having the feeling that we see something exceptional.

The more I read about the Carrizo Plain more I got understanding that we need to check with the rangers about the roads before starting the exploration of Carrizo Plain. And Goodwin Education Center is the best place to do it. So we entered the park, drove past few parking lots with an extreme number of visitors and stopped only a few miles before the turn towards the visitor center. I cannot handle anymore the road among this yellow field.
The road has only two lanes and no visible pullouts. But you can stop along the way. So we found a nice even spot and stopped. The valley between the visitor center and Soda Lake is the most yellow fields I ever saw.

Before the trip, I researched the park and planned to drive a whole loop: Soda Lake Road – Panorama Road – Elkhorn Road – Soda Lake Road. But to my surprise, Elkhorn Road was closed a few miles before Panorama Road junction.
We still drove all the way to the junction. It’s a dirt road but with decent quality.
We met only a few cars on our way. The road has a great view over the Temblor Range and few old farmers structures.

When you drive Soda Lake Road from the north, the first prominent point you see is the Overlook Hill. On a busy day, a parking lot will be filled with cars and buses. Overlook Hill is a must visit the place.
A short hike uphill leads you to the stunning vista of the valley, the lake, and two mountain ranges. Here you can scout the location that you check online. And the place is bustling during the wildflowers season.
But also here we found several types of flowers we didn’t see anywhere in the valley.

Don’t hurry to leave the hardly found parking place. Right from the Overlook Hill, you can walk Soda Lake Boardwalk trail. The trail is short, but it’s the official and the closest path along the lakeshore.
The land around the path is covered with yellow daisies, and the lake has a beautiful reflection of the Temblor Range.

Whether you planned to see the purple, yellow hills, or you are geology junky, you would love to hike Wallace Creek.
If San Andreas Fault is your goal check this document before.
If flowers are everything you ever wanted, just follow an easy trail towards the ridge. When you reach small canyon formed by the creek, find signs of the path on the right and follow it. The road on the left will leads you to the same point but will be a bit longer.
Follow the trail up to the fence. We saw a few groups of hikers cross it. Though there were no signs, we still didn’t pass because we had no idea if it’s legal. But we followed the fence south. In less than half a mile we reached the meadow with purple flowers where we spend more than 30 mins.
Carrizo Plain is managed by BLM, and they allow to venture beyond the trails. I still suggest avoiding walking in the flowers. If you see colorful meadow try to find a nongrassy path to it.

Sunset at the junction of 7-mile road and Carrizo Hwy

We booked the stay at Taft – 30 miles east of the park. And when we returned back to Hwy 58, Carrizo Hwy, the first thing that we saw was around ten cars parked on both sides of the road and trying to photograph flowers behind the fence. However, the same place had a great view of the setting sun. 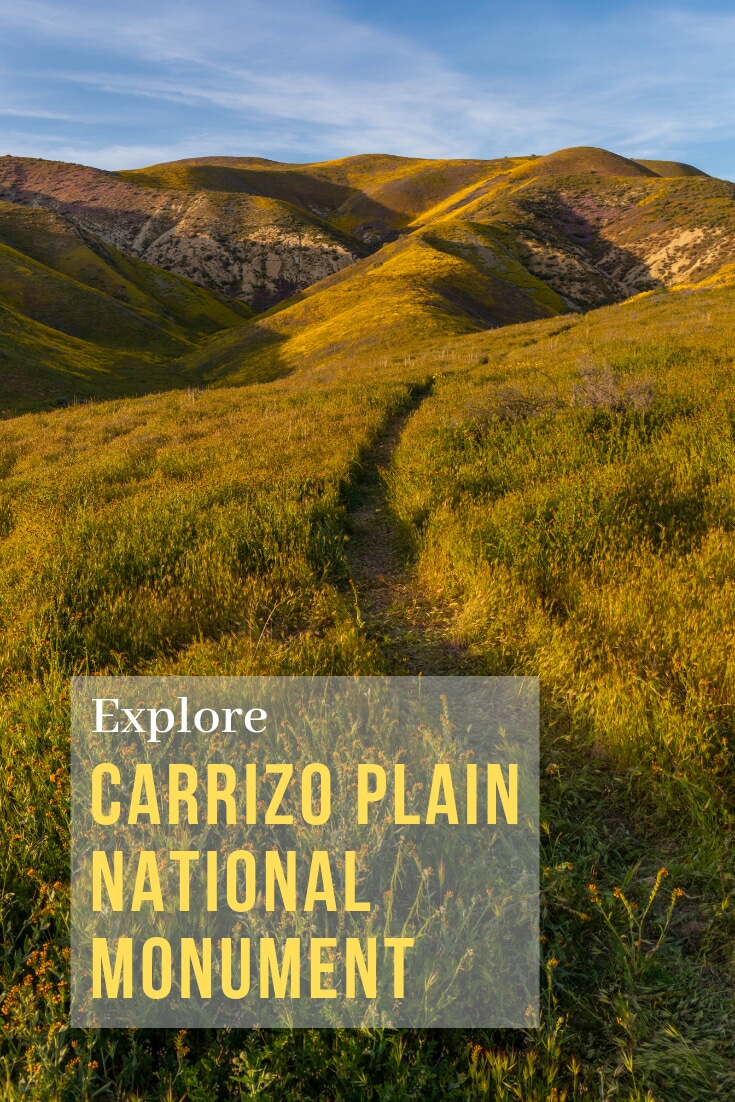