It happened that on Christmas vacations, we spent three days in Albuquerque. The shutdown closed the parks and monuments, winter storm threatened to close roads in the mountain, and Albuquerque wasn’t the worst place.
These three days were the test of my planning skills. I rebooked the hotel, changed routes, and planned stops on a fly. Jemez National Forest wasn’t in my original plans nor my plan B. But when I reread my notes from the travel blogs and books about New Mexico and found this beautiful place, I felt saved. It was one of the most eventful days.

It was my first frozen (almost) waterfall. And so unique!
Officially, Soda Dam, not Soda Falls, is where water from underground hot springs pushes its way to the surface. With time minerals formed a natural dam that blocks the Jemez River and forms falls.

It just happened that snow started when we were already high in the mountains. White snowflakes added a mystery to the surrounding landscape. We stopped at the first open parking and went exploring; there was a trail, so we hiked it.
We walked for half a mile, reached the creek, and explored the area but didn’t cross the bridge.
After that day, I googled, where we hiked only to realized that the trail leads to hot springs. We almost stepped away from them. The trailhead has a beautiful view overlooking the mountains.

Disclaimer: we hiked the trail. However, I would prefer to snowshoe it. The snow was too dip in few places for my legs in the boots.
Also, disclaimer: though the official site tells nothing about operational seasons, Jemez Falls Group Area site’s parking lot was closed. We parked outside of the gates.
Snow became heavier when we arrived at the gate of Jemez Falls Group Area and Campground. Gates (as expected) were closed. So we parked near them. The trail is short, we didn’t plan to spend a lot of time there, so falling snow didn’t scare us. I don’t know how the area looks during the summer season, but it was spectacular under the snow. Closed gates added another mile to the hike, but the scenery looked great, and I enjoyed every step.

The trail itself starts near the picnic area. It wasn’t our first snow hike, but the depth of snow and unknown terrain made it harder to orient and search for directions. At one time, I opened the Alltrails app, loaded their map, and followed someone’s recording.
The trail ends with the viewpoint over the falls. Viewpoint has a railing that prevented me from taking a shot I wanted. However, the view was amazing. Falls freeze almost entirely except the central part.

From the parking, near Jemez Falls Group Area, we turned back. Snow stormed reduced views; shutdown closed both Valles Caldera and Bandelier National Monument on the east. So we drove west. The goal was Fenton Lake State Park.
Few miles after the intersection of La Cueva, we noticed a car stopped on the opposite side of the road.
We slowed and noticed elk in the woods. A flock of that size we last saw in Redwood National Park. They noticed humans but didn’t hurry to the left of the meadow surrounded by pines.

What was a surprise when we drove the same road back, and they still were there. Amazing animals

I had only a few shots from the park, but we were lucky to have it for ourselves. The park has several trails, but only two opened in winter. We walked along the shore, then the trail goes inland and becomes a ski trail rather than hiking.

When we already turned back, the radio announced a winter hazard. The storm that came that day was the heaviest in years (as I read somewhere). We were lucky to have at least one good day to explore the mountains! 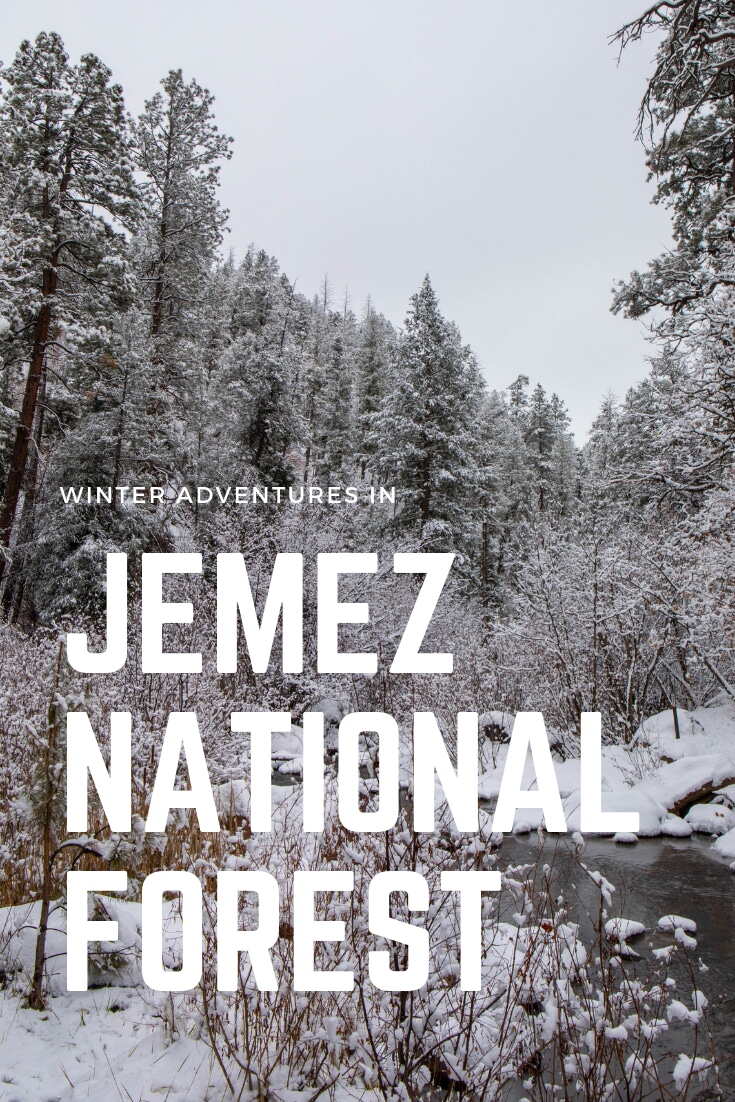