48 miles of between Estes Park and Grand Lake is connected with Trail Ridge Road which has 11 miles above the tree line. This high elevation road is one of the main park attraction. In a short amount of time, it’s going up to the level of the mountains ridges and shows traveler the sweeping vistas.
The road is closed during the winter season, and on holidays it becomes quite busy. We drove it in two directions: on the first day, we started from Beaver Meadow entrance to Grand Lake. On the second day, we drove back. On our first visit, the drive was very relaxing, parking near trailheads had empty spots, and Alpine Visitor Center wasn’t busy at all.
And on the drive back, everything was different. There was traffic on the road, so on some curves, we stopped in queues. Alpine Visitor Center closed its car entrance and parking lot because it was full.
However, no matter how busy, Trail Ridge road is a must-see attraction in National Park System. Below there are photos from the most scenic overlooks of the way from East to West.

Milner Pass is the stop right on the Continental Divide. Here you can park and hike several very beautiful trails. We made Mount Ida trail towards Peak 12,150. You can read it here

The short (.6 miles) trail to Adams Falls is one of the easiest leading to the stunning cascade. There is an overlook at the end of the trail. However, it’s possible to walk a bit down closer to the falls.

You can’t miss Grand Lake. Only if you fell asleep and someone else will be driving. Grand Lake is the largest and deepest natural alpine lake in Colorado. Surrounded by tourist-friendly towns and numerous campgrounds, it’s a great place to stay after the long day of hiking and sightseeing.

Rocky Mountain forever will leave in my head with the memories of moose seeings. The first time we saw the pair of them from the overlook at the Alpine Visitor Center. They crossed the valley above the viewpoint. They were only distant silhouettes.
The second time we saw mom and a baby mouse at the west park entrance near Grand Lake. There is a thing about the national park I almost hate. Everyone wants to see a wild animal while there. People blocks driveways; they stop on a sharp curve to take a glimpse of the bear, deer, bison, you name it. We saw it in Yellowstone, Yosemite, Grand Teton. And we saw it numerous time in Rocky Mountain.
If one stops near the edge of the woods without any trail, most of the passing vehicles start to assume there is some animal to see. And also stop. Even if they don’t see a thing!
When we entered Rocky Mountain that Sunday day we saw lines of the cars parked on both sides of the road. And we wanted to just drive them by without stopping when we notice dark shadows in the forest. This time this huge crowd was right, there were a moose-mum and her child. I was glad to see that no one tried to approach animals and everyone stand on the safe distance near the very edge of the road. There was a ranger who double check those wild humans will not harm moose.
Also, there was a third time, though no photos remain. We hiked that Sunday to the lake in the eastern part of the park when a man showed us moose in the creek in the canyon below us.

All stops and trailheads along Bear Lake Road are the most popular in the park. This area of the park is famous with its waterfall, stunning alpine lakes surrounded with the walls of mountains.
It’s almost impossible to drive and park near the trailheads, most of the time you need to take a shuttle. We were able to park at Glacier Gorge late in the day, a few hours before the sunset on Sunday. Though I think we were mostly lucky, and I doubt there is a system.

This place I spotted in the magazine about the park. The gray mountains and the clear jewel of the lake on the photo almost asked to hike to them.
The trail is 6 miles round trip from Glacier Gorge parking lot. The path is busy for the first mile because it also leads to the Alberta Falls. After the waterfall, it was way fewer hikers.
That day our luck ended at the parking lot. We passed the falls when heard thunder. It was closer to the lake than to the car, so we continued. Okay, we ran. It was our fastest track, I suppose. The rain comes and goes. It was less than three minutes, so we weren’t wet. The rain cleared trails. At the lake, we didn’t see a person!
You can explore the shore walking the huge boulders. Water was stunningly clean! I wish we had more time there, but then I heard thunder again.

The trail follows the creek, few times we passed the series of cascades. This part has the longest sequence, so we stopped to take a few photos.

Alberta Falls are in the list of the majority of the park visitors. From parking and shuttle stop it’s only 0.8 miles of moderate uphill trail. But when you reached the waterfall, you could sit on the boulders and rest. So in the middle of the day, they look like a stream surrounded with ants.
I found just one place where I could put a tripod and get a photo of the falls without a soul. It required some scrambling down the rocks.

If you google Rocky Mountain and open images, one of three photos will be of the Bear Lake. One of the most photogenic lakes in the park, it’s also one of the very accessible and the most visited.
There is a connector trail from Glacier Gorge to Bear Lake, and we took it. Somewhere in the middle of it, rain started. Again it was easier to continue than turn back. However, that time rain was intense and didn’t show sign of the end. We were soaked wet when reached the lake. And one thing that I learned last year, lakes don’t look even half beautiful under the torrent rain. I took a few photos just to have, and we walked back.
We’ve been in the car, I changed to the dry clothes, and only then the rain started to slow down.

Map with all stops 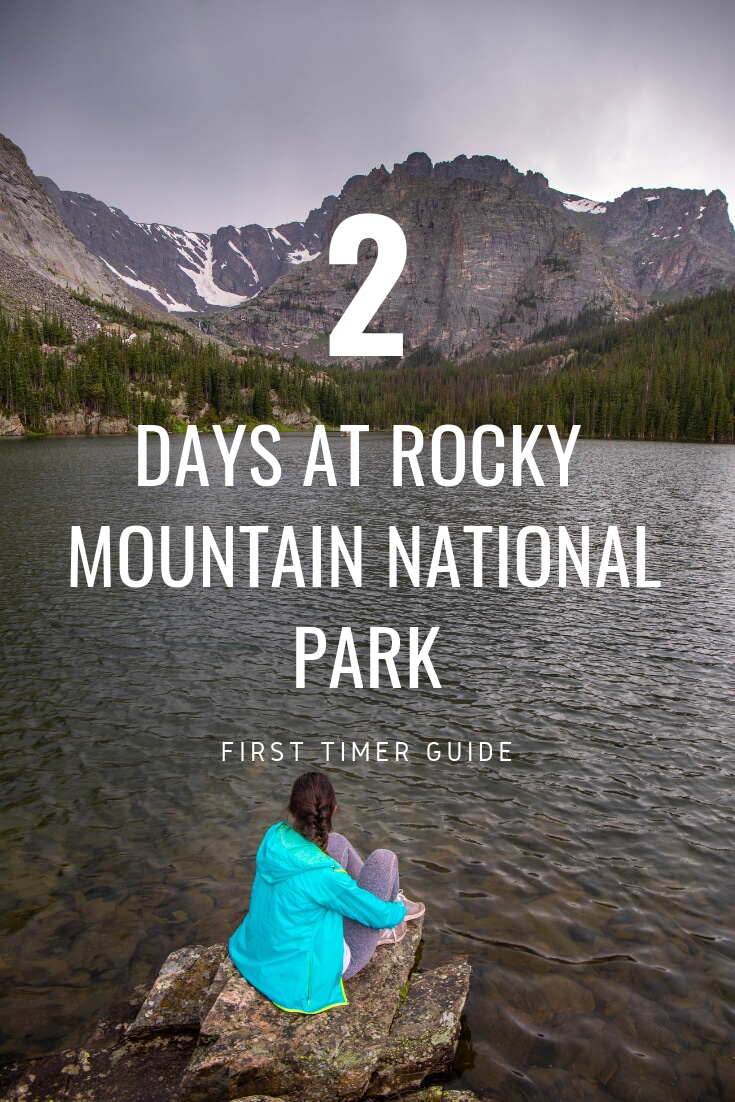