At first, when you are just looking through the photos of redwoods groves of different California parks, it could feel that they have little differences. But as I learn from my experience, each of it has its mood, colors, and light. And Jedediah Smith Redwoods has the feeling of ancient, Jurassic times.

It was a grey and wet November day on the California North coast. It was a typical average day. We’ve never been so far north so late in the year. It wasn’t even in plans just a month ago. But then I read about the cabins in redwoods state parks and decided to check them out.
Jedediah Smith Redwoods is not only famous with its groves. It has Smith River running through its northern part. Very mystic and fairytale-looking Howland Hill Road goes through the heart of the parks, and is a must do for everyone who wants to explore redwood woods of the north.
Howling Hill Road is a dirt path that starts near Crescent City and going deep in Jedediah Smith and follows Mills Creek. It’s surrounded with old grown redwoods standing tall and giving you a feeling of a Lilliputian among the giants. It could be very busy during summer and weekends but on that cold season Saturday we met just two or three cars.

Several fascinating and beautiful trails start from Howling Hill Road: Nickerson Ranch, Mill Creek, and Boy Scout trails. And Boy Scout is a park jewel. One said it’s one of the most beautiful paths in all Redwoods National and State parks. And we did it.
What I liked the most of the trail, you start to enjoy it from the very first step. Old grown trees, huge green ferns, young trees and sprouts growing from the fell redwoods surround you with the green wall. Even the air looks green.

The first part of the trail is dominated with redwoods. The second part has more deciduous trees. And they changed the mood of the path. It was late fall, but trees were still bright with yellow and orange foliage. It also looks and feels fantastic but different. The trail starts to follow a creek closer.
There are two attractions on the trail. Fern Falls is the end point of the trail. And if you are waterfalls addict, you will not enjoy it, especially so late in the year. I didn’t read anywhere that the stream and falls are seasonal.
Probably low precipitation was the reason for small water flow. I didn’t find anything special in Fern Falls.

The second, and the name giving sight is the huge Boy Scout Tree. It’s not immediately on the trail; you need to follow an uphill spur. But the tree is fantastic!

Catch a sunrise on a river

Smith River is crossing the park. The campground sits on the pebble river bank. In summer there is a seasonal bridge to another side of the river that connects with several great trails. You also can swim in the river during the warm season.
The curve of the river was a nice place to wait for sunrise. The day was overcast but the clouds changed the color to pink for a few minutes.

We stayed in the cabin in the park campground for the night. And it was a charming cabin: newly build, clean, warm. It had two level bunk bed.
The site was big and leveled. The fire pit deep but not too deep. The place was surrounded with high first grown redwoods. 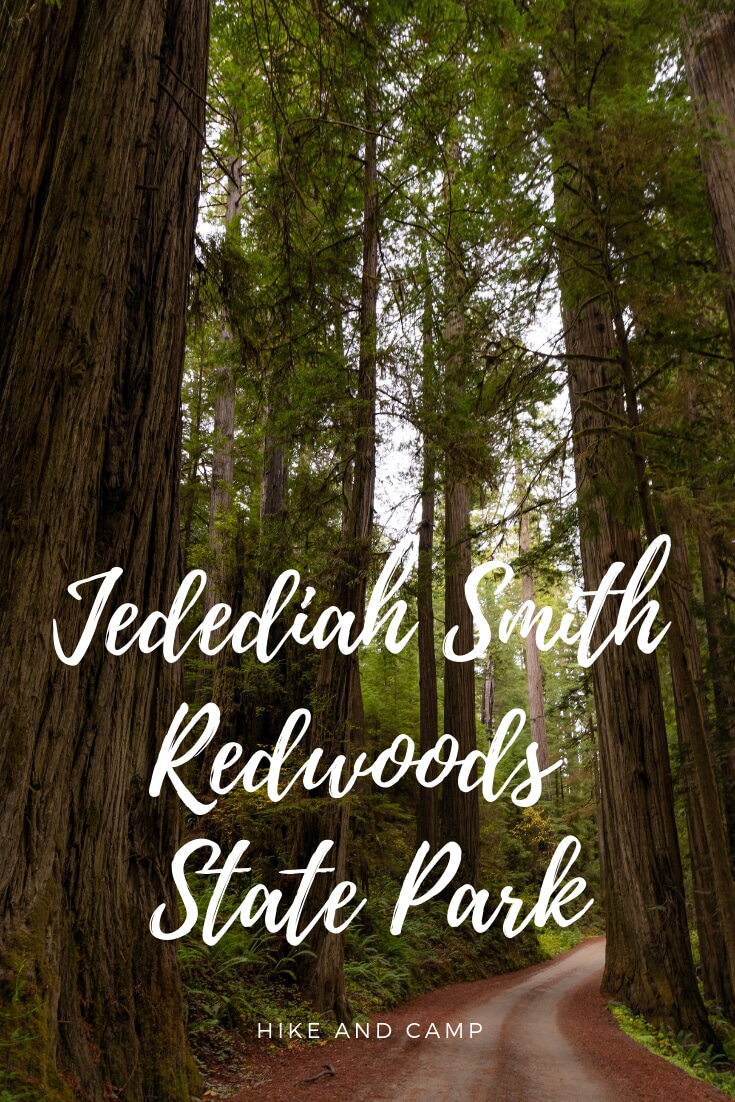